Popularly known as the shorter version of the world cup tournaments, The ICC Champions Trophy is the most successful and awaited sporting competition around the globe. Being organized by the premium sports governing body – the International Cricket Council (ICC), this quadrennial tournament enjoys a dramatic increase in its broadcast and sponsor revenues. This tourney was inaugurated as the ICC KnockOut Tournament in the year 1998 but later the name was changed to ‘The Champion’s Trophy’ in 2002.

The Champions Trophy is a professional league contested every four years by eight franchise teams, representing their respective countries. The prominent and member nations participating in this tournament are South Africa, India, Pakistan, Australia, New Zealand, Sri Lanka, West Indies, and England. Subsequently, they were joined by a few associate and non-test playing nations like Bangladesh, Kenya, Netherlands, United States, and Zimbabwe till 2006. However, the ICC does not entertain the associate nations now, and that’s what makes Champions trophy the shortest ICC tournament till date.

The eight prominent teams are split into 2 high-seeded groups, namely Group A & B. While the former group consists of England, Bangladesh, New Zealand, and Australia, the latter comprises India, Pakistan, Sri Lanka, and South Africa. Following the ‘Double round-robin’ play format, each team has to pass through the final knockout stages and then enter the final match. Over the history of the Champions Trophy Tournament, Australia and India are the two eminent countries that have won the ‘Champion’s Title’ twice. On the same note, South Africa is the winner of the inaugural edition held in Bangladesh while India is the defending champion as well as the current title holder. 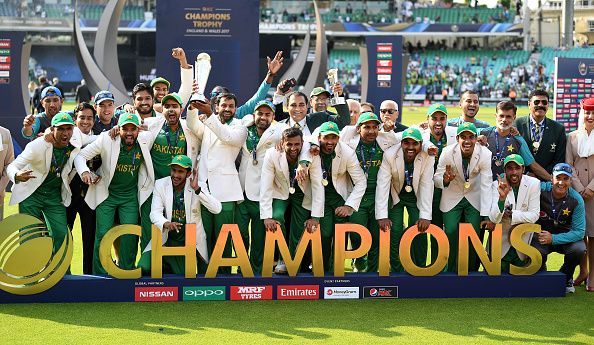 South Africa, India, Pakistan, Australia, New Zealand, Sri Lanka, West Indies and England have been the prominent teams participating in the tournament. They were joined by few associate countries or non-test playing nations like Bangladesh, Kenya, Netherlands, United States and Zimbabwe till 2006.

However, since the 2009 edition, only top eight ranked teams are eligible to play in the tournament.

Chris Gayle (791 runs) of West Indies has the most runs by any batsman in this tournament, followed by Mahela Jayawardene (742 runs) of Sri Lanka and Shikhar Dhawan (701 runs) of India.

Among all, Shikhar Dhawan (101.59) has the highest strike-rate, while Nathan Astle (145*) and Andy Flower (145) hold the record for the highest individual score of the tournament, which they made against the United States in 2004 and against India in 2002, respectively.

Kyle Mills (28 wickets) of New Zealand has picked up the most number of wickets in the history of the tournament. He is followed by Lasith Malinga (25 wickets) and Muttiah Muralitharan (24 wickets), both from Sri Lanka.

Muralitharan’s 3.60 is the lowest economy of the tournament. Farveez Maharoof (6/14) of Sri Lanka and Josh Hazelwood (6/52) of Australia hold the record of best bowling figures in an innings, which they made against West Indies in 2006 and against New Zealand in 2017 respectively.

Captivating the global audience with its dynamism and unique game format, the action, thrill, and adventure never stops at the Champions Trophy Tournament. With the global exposure and impressive patronage of cricket fanatics, the Champions Trophy allows the punters to place wagers on attributes like the outright winner, match results, the man of the match, top batsman, top bowler, coin toss, total innings, super overs, boundaries, sixes, partnerships, individual player stats, and other incredible possibilities.

In this regard, the experts at Cricdaddy can help you gauge the form and fixture history of the competing Champion teams while formulating a great strategy and game plan. Right from the latest team news to odd chart shifts, insider betting tips to a roundup of results, our customer-focused information will not only prepare you for the upcoming betting games but will also fine-tune both your attitude and aptitude.

As the new season of ICC champions trophy is approaching nearer, it would be interesting to see whether the defending champions ‘India’ will lift the trophy for the third time, or we’ll get a new champion trophy winner. Although the match fixtures, odds charts, and rankings of each ICC season keep on evolving, one element that stays constant throughout all the seasons is the action-packed gaming experience. So to become a successful, high-rolling bettor in this arena, it’s important to sharpen your wagering aptitudes and start with the pre-tournament preparations. Additionally, you must also stay abreast with the upcoming match schedules, rankings, head-to-head statistics, historical statistics, and other highlights to have a knack of the game.

From the amazing batting feats to the breathtaking last-over wicket, record-breaking boundaries to smacking sixes, Cricdaddy is primed to bring the detailed coverage of your favourite sport at your fingertips.

Stay tuned to catch the glimpse of every ball or smacking six from the Champions Trophy live!